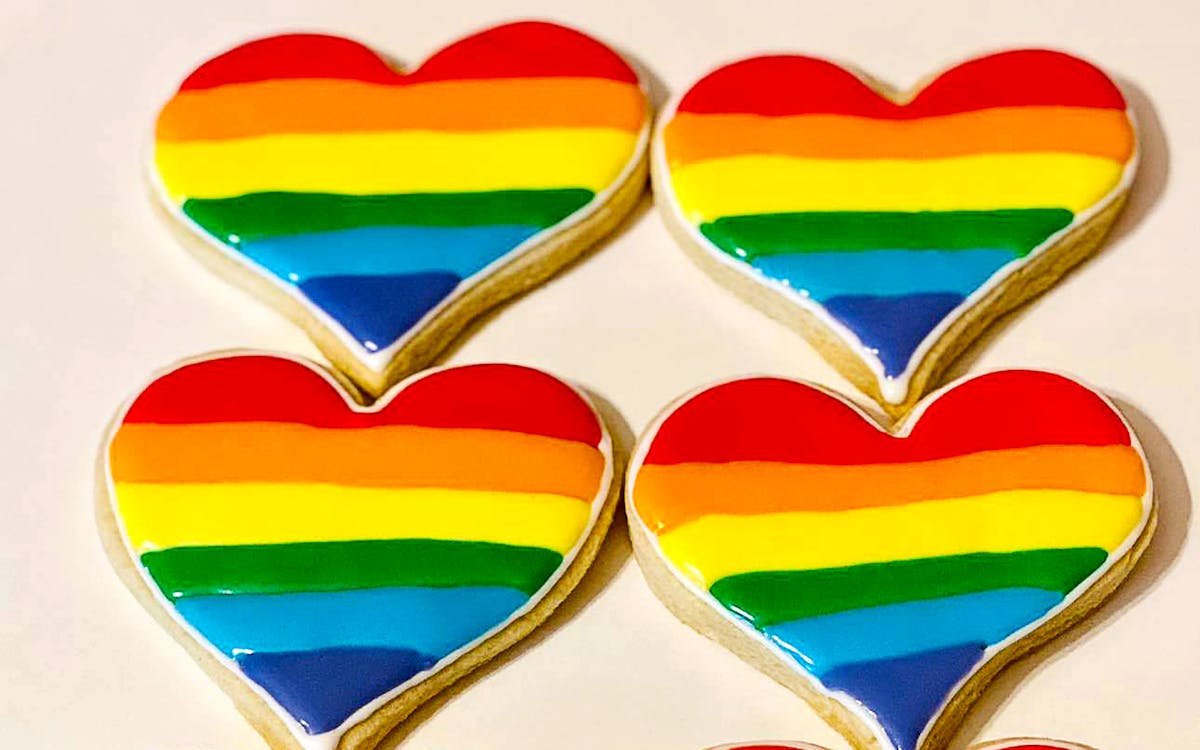 WHO: Dawn Cooley and Miranda Dolder, sisters and co-owners of Confections, a bakery in the East Texas city of Lufkin.

WHY IT’S SO GREAT: On Wednesday, June 2, Cooley and Dolder were operating their small bakery as usual. As they iced cookies, assembled sandwiches, and decorated cupcakes, they also took to social media to post pictures of their latest creations.

If you scroll through the bakery’s Instagram or Facebook feeds, you’ll see bright, colorful iced sugar cookies with designs featuring Yoda, Willie Nelson, and a herd of smiling unicorns. That afternoon, the women posted a photo of a half dozen rainbow heart cookies, pairing it with the caption “More LOVE. Less Hate.” The post was meant as a simple way to celebrate Pride Month, which affirms LGBTQ equality and culture—but in the hours after it went up, the business lost “a significant number” of followers. According to the owners, it also received a hateful message, from a customer who canceled an order of five dozen cookies. Sixty cookies might not sound like a lot, but for a small shop that was already struggling to stay in business, losing the order hurt.

“That’s big in our world,” the owners wrote on Facebook. “Today has been hard. Really hard. … If you love our cookies we will have an overabundance of them tomorrow. Hopefully tomorrow will be better.”

And in a rare positive moment for social media, it was. By Saturday night, Confections had gone viral on Twitter. It’s not the first time something like this has happened: Last month, diners rallied to support a restaurant in Long Beach, New York, after it received hate mail for its gay pride flag. And last summer, the owner of a California cookie shop went viral after a video showed a farmers’ market manager asking him to stop passing out rainbow flags.

Confections’ original rainbow heart post now has more than 30,000 likes, and over the weekend, thanks to lines of customers that wrapped around the block, the bakery sold out completely. On social media, the shop was inundated with thousands of messages from admirers around the country. (Confections didn’t respond to Texas Monthly’s inquiries.)

In a screenshot posted to the shop’s Instagram story, one woman wrote, “I just wanted you to know that baking rainbow Pride cookies is an act of courage and love,” signing off “Lesbian, grandmother, & cookie-lover.” Even RuPaul’s Drag Race star Alyssa Edwards DM’d the business asking if it could ship cookies (not yet, unfortunately for those outside Lufkin). Brian Cuban, the brother of investor and Dallas Mavericks owner Mark Cuban, also reached out.

Amid all the chaos, Confections used its newfound fame to encourage anyone who couldn’t come out to Lufkin to instead support three local animal-rescue operations. As of publication, fans had donated more than $2,400 to the featured group, Blue Collar Mutts Rescue. One note that the bakery received reads, “I’m a Christian Mom of a gay son … We have family in Longview/Gladewater area that are not supportive, so I don’t think of East Texas people as safe. But you and your community have proved me wrong.” The outpouring of support for Confections dispells the stereotype that small, rural Texas towns are uniformly homophobic. And on social media, where the viral narrative of the moment is more often driven by outrage and anger than by kindness, this story provided sweet relief. Confections and its heart-shaped cookies prompted its community to affirm the simple message that kicked this off: “More Love. Less Hate.”

The Best Thing in Texas: Curbside Larry Is the Hero We Need in These Times

Luka Dončić and Dirk Nowitzki Had a Moment Last Night