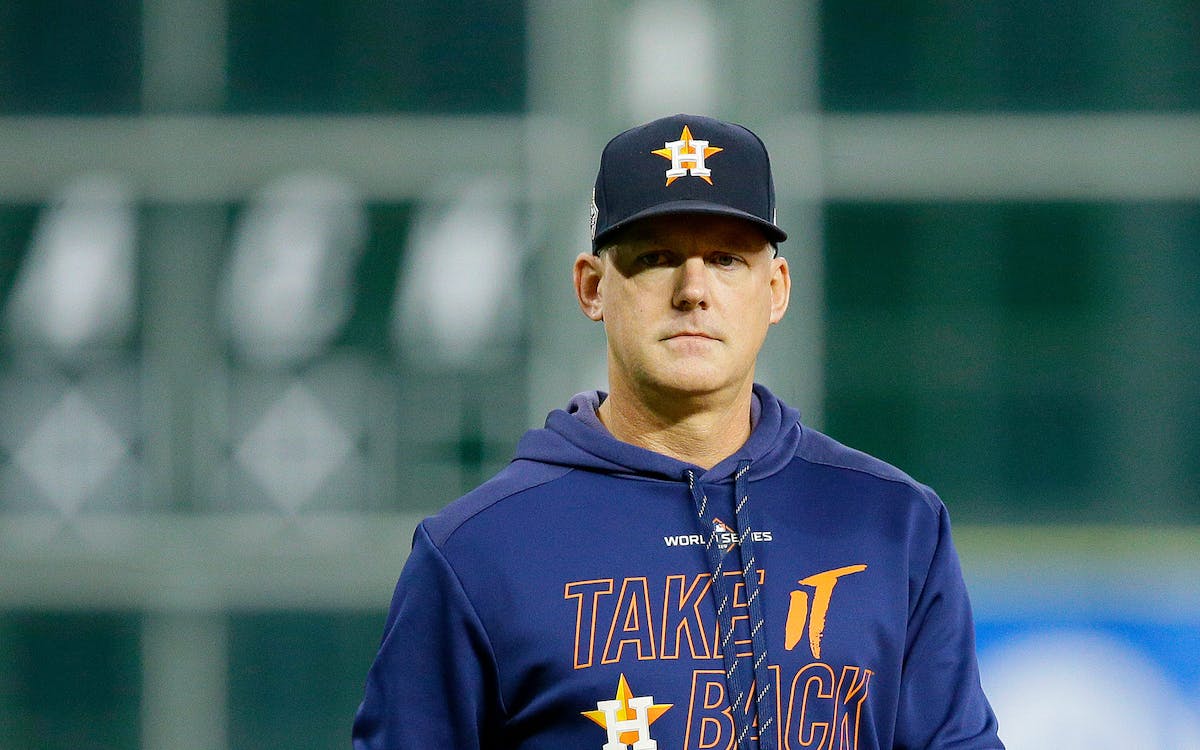 Remember how offended former Astros manager A. J. Hinch pretended to be in 2019, when reporters asked him to respond to accusations that his team was cheating during the American League Championship Series against the Yankees?

“It’s a joke,” he said at one point in a rambling response that we can now look back on and appreciate for its fake outrage and sheer gall. It was a performance Meryl Streep could admire. In other words, shame on us for asking. As if to emphasize that point, Hinch finished with a mic drop: “That will be the last question I answer about pitch tipping or pitch stealing.”

Off with your heads, rodents. Had he risen from his chair and stomped out of the room, the moment might have lived forever in our hearts, minds, and YouTube histories. Had we known then what we know now, we might have rushed the stage to shake his hand and tell him, “Good one, buddy, you darn near convinced us.” Instead, it being the postseason and all, and pregame content being in short supply, Hinch politely took seven more questions, beginning with one about pitcher workloads.

What we know now is that Hinch was the manager of the Houston Astros during a three-year stretch (2017–2019) in which they won more games than any other major league team, while also engaging in a sign-stealing scheme that has diminished the career legacies of several players and cost Hinch and general manager Jeff Luhnow their jobs in Houston.

But far and away the biggest impact is that the sweetest moment in the often-disappointing history of Houston professional sports—the 2017 World Series win over the Dodgers—would come to look small and tawdry. Until this week, we’d mostly assumed that the Astros stopped their cheating after that World Series. After all, two of the architects of the scheme, bench coach Alex Cora and veteran player Carlos Beltrán, had moved on. In addition, MLB commissioner Rob Manfred’s investigation found no evidence the Astros cheated after sometime in the middle of the 2018 season.

Now, it appears the sign-stealing extended through both the 2018 and 2019 seasons, thanks to New York baseball writer Andy Martino’s newsy new book, Cheated: The Inside Story of the Astros Scandal and a Colorful History of Sign Stealing, released this week.

That this latest broadside comes from a reporter who’s well-connected in Major League Baseball and well respected among the MLB press corps makes it difficult to attack. Martino reports that at least three Astros—José Altuve, Josh Reddick, and Brian McCann—didn’t take part in the sign-stealing. On the flip side, utility player Marwin González appears to have been the biggest beneficiary of the trash-can banging.

For Astros fans still hoping for some vindication on their team’s behalf, this isn’t it. While the Astros weren’t the only team breaking rules, they were better at it and more aggressive with their transgressions. As one general manager told Martino: “A lot of us are operating in shades of gray. The Astros are black and white.”

As previously reported, the Boston Red Sox definitely broke some rules, while the Los Angeles Dodgers, Cleveland Indians, and Milwaukee Brewers were suspected of it. But none of them pushed the envelope as far as Houston. As for the Yankees, they did experiment with a sign-stealing scheme that was so complicated it may not have broken any rules. They were so careful about keeping players away from replay monitors near their dugout that they erected a barrier to prevent anyone from stopping by for a quick peek.

What Martino’s reporting reveals again and again is that technology—tiny cameras, smart watches, and especially monitors located near dugouts—led to paranoia that every other team was doing something to gain an unfair advantage. After Mets ace Jacob deGrom was hit hard in a game at Dodger Stadium, he personally wandered the ballpark the next day to look for cameras.

The Astros were number one on nearly everyone’s list of suspected sign-stealers. The Oakland A’s had long complained that the Astros were cheating, and manager Bob Melvin confronted Hinch at one point. The Texas Rangers were so concerned about eavesdropping that they instructed their starting pitchers not to discuss strategy during the pregame walk from the bullpen back to the visiting dugout.

Martino writes that the Astros had so many “comfortable” swings in one three-game series against the Orioles that upon returning home, Baltimore manager Buck Showalter told his GM, Dan Duquette, his suspicions that something was up. Duquette, watching from afar, had come to same conclusion. One team, hoping to catch the Astros, instructed its players to “get lost” one afternoon before a game and make their way behind the home dugout at Minute Maid Park. There, according to Martino, they found a worn spot in the wall where it appears a massage gun had been used to convey signs from television monitors.

The Seattle Mariners covered several GoPro cameras around their dugout at Minute Maid Park with towels, Martino reports. The Tampa Bay Rays asked MLB to be on the lookout for Houston players wearing vibrating Band-Aids during their 2019 playoff series against the Astros.

Before the ALCS that year, Yankees general manager Brian Cashman asked MLB to search Minute Maid Park for cameras and listening devices. His team believed the Astros were also using flashing lights in center field to relay signs. MLB agreed to search the park but warned the Yankees not to become distracted by their suspicions, as they believed the Rays had been in the previous round. But the Yankees had plenty of reasons to suspect the Astros of breaking rules. Yankees outfielder Cameron Maybin, a former Astro, told his coaches to be careful in Houston.

“When you go in there, you’ve got to make sure your sh– is totally buttoned up,” he said, according to Martino.

Before the 2019 World Series, the Nationals had received so many warnings about the Astros that they completely changed their signaling system—which likely helped them win four road games in Houston en route to claiming the series.

Here’s how the Astros did it: the team monitored a television screen near their dugout, picked up the opposing catcher’s signals (which sometimes had been deciphered by the team’s front office), and relayed that information to the hitter by banging on a trash can when an off-speed pitch or curveball was being thrown. By 2019, the banging of trash cans had been replaced by a whistling coach and possibly a massage gun fired against the wall behind the home dugout in Houston, according to Martino.

Sign-stealing is not illegal. Runners at second base have attempted to figure out signals and relay them to hitters for as long as baseball has been around. But stealing signs via a television monitor and relaying them in real time is way over the line. How much did Astros hitters benefit from the scheme? Here’s a number to chew on: the Astros swung at just one of Clayton Kershaw’s 51 off-speed pitches in game five of the 2017 World Series. Kershaw lasted four and two-thirds innings—the shortest postseason start of his career, at that time—and was unable to hold leads of 4–0 and 7–4. In 101 previous games with Kershaw, given a lead of at least four runs, the Dodgers were 100–1.

Martino’s book opens with game one of the 2019 Astros–Yankees ALCS, when the New York coaches could hear Houston hitting coach Alex Cintrón whistling as pitcher Masahiro Tanaka began his windup:

The exact tone and volume of the whistle would vary, depending on the pitch that Tanaka was about to throw.

Yankees manager Aaron Boone and a few of his coaches started yelling across at Cintrón, telling him to stop.

“What the f— are you gonna do about it?” Cintrón called back.

Between innings, Boone approached home plate umpire Bill Welke and reminded him that MLB officials had instructed teams not to whistle. Welke told the Astros to stop. “The Yankees were sick of suspecting the Astros,” Martino writes, “sick of having to change their sign sequences constantly, and sick of trying to beat a team they viewed as deeply unethical in order to advance to the World Series.”

Some will wonder if Hinch’s arrogance in that 2019 news conference was the beginning of the end. By that time, he probably figured his team would never be caught. But in denying the 2019 accusations, he made a gigantic mistake. He issued a dare: “We have people that are unnamed,” he said. “I suggest they put their name by it if they’re so passionate about it to comment about my team or my players.”

Three weeks later, someone did. Oakland A’s pitcher Mike Fiers, who pitched a no-hitter for the Astros in 2017, told the Athletic that his former team had used a center-field camera to steal signs on their way to winning the 2017 World Series. “That’s not playing the game the right way,” he said. “They were advanced and willing to go above and beyond to win.”

Manfred initiated an investigation and offered players immunity from punishment in return for their cooperation. That decision has been roundly criticized, but Manfred saw no better way to unearth what actually happened. After the commissioner suspended Luhnow and Hinch for the 2020 season, Astros owner Jim Crane fired both. Hinch served his suspension, then was hired to manage the Detroit Tigers. Cora, who managed the Red Sox to a championship in 2018, was suspended for 2020 as well. He returned to the Boston dugout and resumed his position as manager this season.

To replace Hinch, the Astros hired seventy-year-old Dusty Baker, one of MLB’s most respected figures. Baker arrived in Houston having previously managed 3,500 games for the Giants, Cubs, Reds, and Nationals. No cheating accusations have been leveled since he arrived, and in his first season, the Astros got within one game of going to the World Series for the third time in four seasons.

With fans across the country returning to games amid the lifting of COVID-19 restrictions, Houston’s players have been hearing boos at every road game. But armed with a collection of talented young pitchers, the 33–26 Astros appear headed for a fifth straight playoff appearance. Only five active players on the team remain from the 2017 championship roster—Alex Bregman, Carlos Correa, Yuli Gurriel, Lance McCullers Jr. (a pitcher who wouldn’t have benefited from sign-stealing at Minute Maid Park), and José Altuve.

These holdovers haven’t exactly covered themselves in glory with their half-hearted apologies for the organization’s cheating. One of their defenses is that they were good enough to win without breaking any rules, which makes it even worse that the team broke so many.

Regardless, Martino’s book is the latest reminder that their sins will follow the Astros forever.

Behind the Scenes of UT’s ‘The Eyes of Texas’ Controversy